Fans of the Marvel Cinematic Universe met the Black Panther’s loyal retinue, the Dora Milaje, in Captain America: Civil War. They’ve had our attention ever since. Most recently in The Falcon and the Winter Soldier, we were reminded (and John Walker learned) just how bad-ass the Wakandan warriors are.

If you need more of the Dora Milaje in your life, here are just a few Marvel comics that highlight the fierce fighters of Wakanda. These books reveal some of the Dora Milaje’s tantalizing secrets, from their debut in the 1990s to the warriors’ appearances in recent years.

Black Panther has been a part of Marvel Comics since 1966, but the Dora Milaje didn’t appear until 32 years later. Christopher Priest’s iconic Black Panther run introduced the king’s personal bodyguards in the first issue.

Dora Milaje means “adored ones” in Wakandan, the first pages revealed. The warriors were chosen as representatives of their tribes, which was considered a great honor. The Dora Milaje spoke the Hausa language with their king and among themselves. 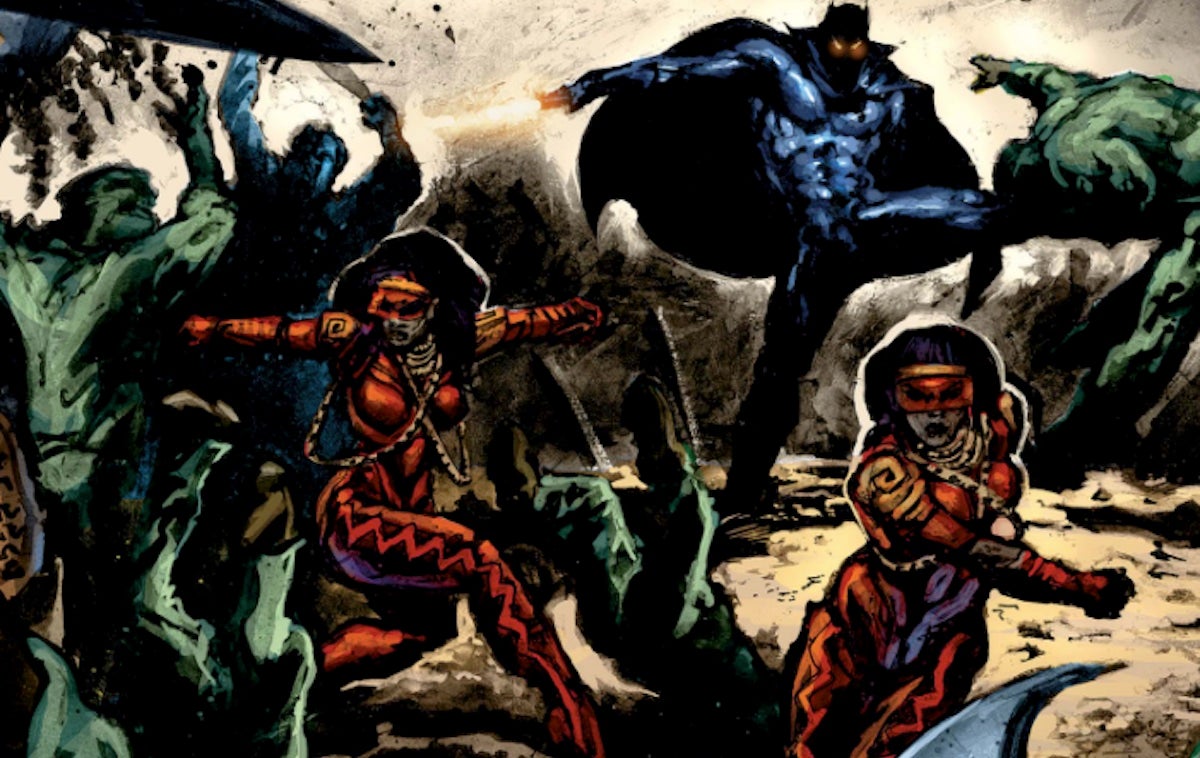 Nakia Shauku and Okoye were still quite young when readers met them as the first Dora Milaje. Narrator Everett K. Ross described them clumsily as “Amazonian teenage karate chicks from two Wakandan tribes.”

They protected their king as he completed his duties as both T’Challa and the Black Panther. During a mission in New York City, Mephisto tricked T’Challa into kissing Nakia—a mistake that would come to haunt the Dora Milaje and Black Panther.

Ross also defined the Dora Milaje as wives-in-training for the king. “Keeping them in his family as potential wives somehow kept the peace between the city dwellers and the tribal factions,” he explained. But T’Challa considered that role purely ceremonial. (The only training in “wives-in-training” was in combat and deadly weapons.) 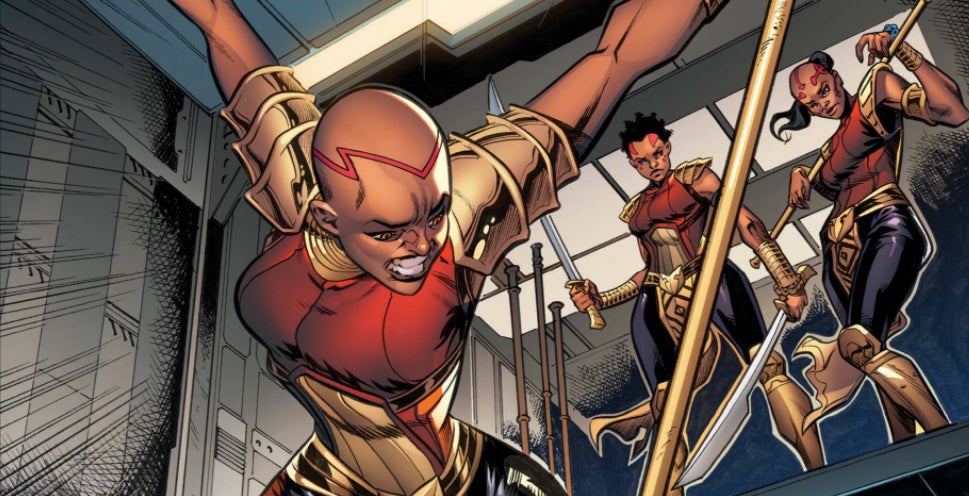 As for the wife he eventually chose, T’Challa married Ororo Monroe, also known as Storm of the X-Men. The Dora Milaje continued to serve as the king’s retinue. Eventually, the royal superheroes found themselves embroiled in the Civil War on the side of Captain America. And when Black Widow intervened to stop T’Challa, two Dora Milaje disarmed her and took her down quickly.

In time, the warriors’ roles as potential wives and queens diminished until the tradition was abandoned outright. Two Dora Milaje did love, though—among their own ranks.

The first arc of Roxane Gay’s World of Wakanda (2016) gave readers an inside look at how the Dora Milaje lived and trained under the watchful eye of Mistress Zola. “Your service will require sacrifice,” she told the prospective warriors. She and Captain Aneka trained them at Upanga, the headquarters of the Dora Milaje.

Among the initiates’ ranks was young Ayo. Aneka and Ayo felt an instant connection and immediately butted heads. Their feelings eventually turned to love. When Aneka was sentenced to death for killing an abusive villain, Ayo stole technologically advanced prototype suits and freed her from prison.

The two became the Midnight Angels in the pages of Ta-Nehisi Coates’ first Black Panther run in 2016. No longer Dora Milaje, they were instead vigilantes seeking justice for the mistreated women of Wakanda.

The kiss that Nakia and T’Challa shared in New York became an obsession for the young Dora Milaje. Okoye tried to dissuade her fellow warrior from her fantasy of marrying the king, but Nakia insisted that T’Challa loved her. She tried to kill a woman he loved named Monica Lynne, and the king expelled her back to her tribe.

She crashed her vehicle as she fled from the palace, and Achebe, an enemy of T’Challa, captured and tortured her. Eventually Nakia was saved and transformed by Erik Killmonger, and she adopted the name Malice. She sought to claim T’Challa solely for herself. 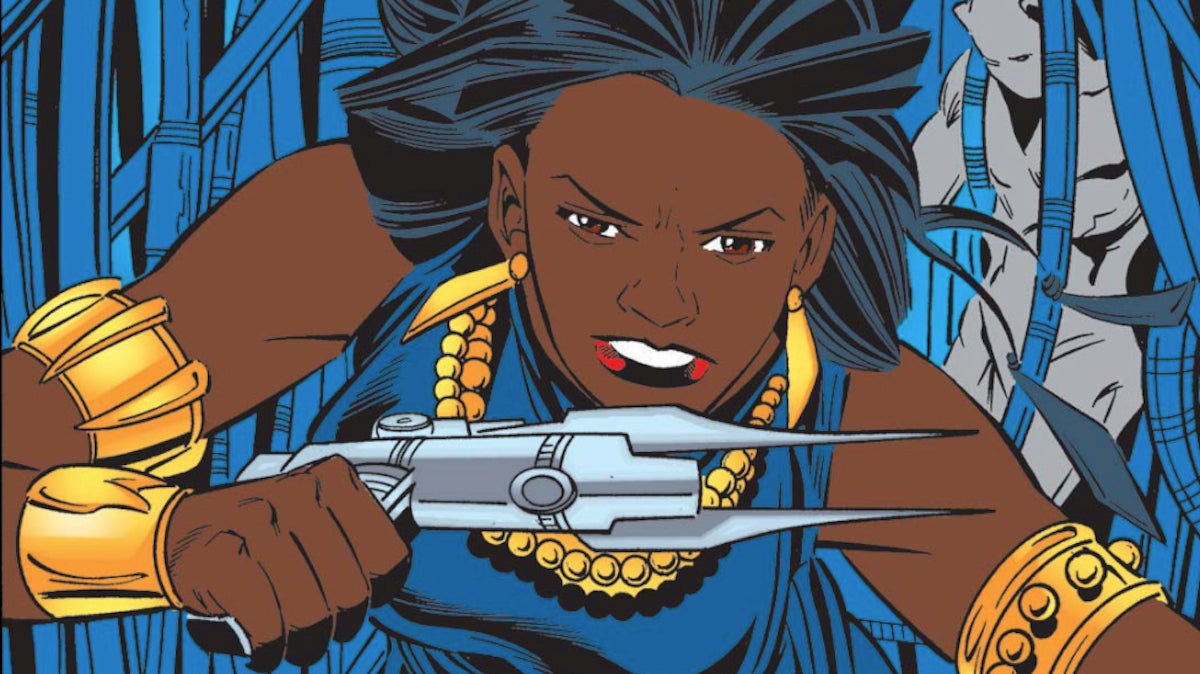 Broken mentally but enhanced with superhuman strength and reflexes, Malice also had access to an herb that could brainwash men to do her bidding. She was defeated by T’Challa, but it would be years before the last confrontation took place between Malice, the Dora Milaje, and Black Panther.

In the 2018 mini-crossover event Wakanda Forever, Okoye, Aneka, and Ayo teamed up with Spider-Man, the X-Men, and the Avengers to oppose Nakia and end the death and destruction she had wrought as Malice. Nakia finally faced her king. To her shock, T’Challa apologized for failing her so many years ago. Nakia came back to the Dora Milaje and fought alongside them one last time. She died shortly after.

As the mantle of Black Panther led T’Challa to face worldwide threats alongside the Avengers, the Dora Milaje began to realize they were needed more at home than at his side. After the destructive events of the Infinity crossover, they renounced T’Challa. He had been away from Wakanda when it was devastated by Thanos. They discovered he’d also teamed up with an enemy of Wakanda, Namor, in the fight against Thanos, an act that was considered treasonous.

They pledged their allegiance to Queen Shuri in his place.

In time, Black Panther made peace with Aneka and the Dora Milaje as Coates’ first Black Panther run concluded. T’Challa proposed a new constitution and a new form of democratic government for Wakanda. He would remain king, but to represent the nation, not rule it as a tyrant.

One Dora Milaje has stayed at T’Challa’s side through it all: Okoye. General Okoye became the leader of the Agents of Wakanda in Black Panther and the Agents of Wakanda (2019) #1.The team was put together by Black Panther to gather intel for the Avengers and handle any immediate threats. Even when leading an unusual lineup with Wasp, Mockingbird, Man-Wolf, and more, Okoye’s heart remained true to her king and Wakanda above all else.

Kelly Knox is a freelance entertainment writer who also contributes to StarWars.com, DCComics.com, Nerdist, and more. Follow her on Twitter at @kelly_knox to talk Star Wars, Dungeons & Dragons, and comics.